Why don't people laugh at workplace? 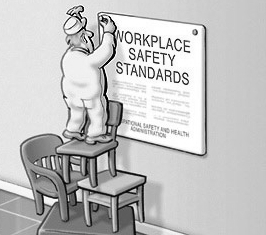 Laughing at workplace is perceived as an eccentric behavior and its impact influences (positively or negatively) the work flow, as this perception varies from individual to individual. There are so many corporate who think that it's an essential thing which reduces impact of undue work pressures and gives relax to the human resources, if sprinkled controllably over entire working hours. However, the phenomenon is completely different at many places where people don't laugh, rather prefer to focus on all other official duties.

1. Non-suitability : - A number of office-goers think that laughing at work is totally inappropriate, as they strictly need to be in "Corporate-Mode" even if something really hilarious happens around. But, the practical office life is totally different from this perception, leaving certain instances when it's really inappropriate to laugh on issues like during crucial business meetings, any jokes by competitors, serious announcements etc. There are several instances in which you can laugh (except giggling and guffaws) like after reading funny IMs, Emails, during meetings etc.

2. Impact on Repute : - Generally, the tendency of people ends during school time that what people think of them if they laugh on things. But, it's observed that this tendency of people persists even after reaching corporate world. Somewhere, people think that what people around think of them and how it's going to effect their reputation on just laughing. It's the fact that laughing is an activity which is directly attributable to any personality, even if some people don't. The same applies to your work place, where you would definitely laugh at things for which your mind thinks is funny. Though, your mind will surely check whether the superior or peer is laughing on the same thing or not. So laughing is admissible unless any serious discussion is going on.

3. Scope of Funny Events : - It's true that workplace is not meant for fun and enjoy. But at the same time, it's also evident that workplaces haven't remained untouched of humor and fun at times. So if something occurs like funny, then there emerges scope of laughing. Hence, people may laugh rather than working robot-like creatures.

4. Laughing : - A Non-Customary Trend As laughing at workplaces is a non-customary culture, due to which people usually don't react on the humors happening all around. However, there is no constraint on laughing if it done on sensible humors.

2 thoughts on "Why don't people laugh at workplace?