10 Reasons to Apply for Railway Jobs 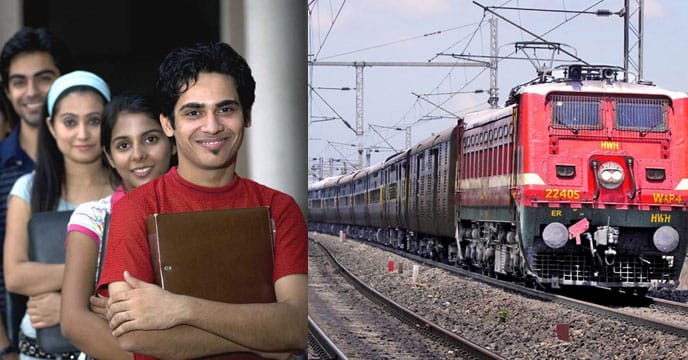 Indian railway is 4th largest rail network in the world and employer to 15 lakh plus employees. Indian railway is the world’s 9th biggest employer in the world. The railway recruitment is managed by railway recruitment board which was formerly as Railway Service Commission. In 1985 its name was changed and now it is known as Railway Recruitment Board. This board work under the ministry of railways. All the railway employment notices for railway jobs are issued by Railway Recruitment Board. If you are also seeking a job in railways you can visit the official website of RRB and also get railways jobs 2018-2019 update on PlacementIndia.Com. The job in railways offers a successful and rewarding career option. Indian Railway is a great revenue-generating source for the government of India. Railway jobs are a lucrative option for candidates who wish to get a reputed job along with good salary and perks. Let’s have a quick look on facts which throw light on the key benefits of a railway job:

1. Indian Railways offer maximum number vacancies for the job seekers, hence this sector offers great prospects for candidates to get a govt job. Every year lakhs of railway jobs are published by RRB to hire technical and non-technical staff for railways.
2. Indian Railway is divided into various zones like Northern Railway, Eastern Railway, Western Railways and Southern Railways, which facilitates job seekers from all over India to try their luck and get a government job near their native place.
3. The selection procedure for railways is managed by RRB which ensures that the entire process is conducted with transparency and honesty, thus there is no scope for unfair selections.
4. Railway of India offers all the benefits of a govt job like DA/TA, HRA, grade pay, perks etc. It is a revenue-generating department of Indian govt hence it offers good monitory benefits for its employees.
5. Railways offer a safe and secure future during and post service period, there is no impact of recessions of crisis on railway employees and also after completion of service a railway employee gets pension and family pension facility as well.
6. In case of death during service, railway offers job to the family member of the employee on compensatory grounds.
7. Railways also have a strong union which fights for employee welfare and keep getting more benefits for railway employees
8. Indian Railways also offer residential facilities for its employees. There are well-built railway colonies in each city which offer accommodation for railway employees. More than half of railway employees avail railway accommodation facilities.
9. One of the biggest advantages of railway job is that you get free railway passes for you and your family to travel on any network of Indian Railways.
10. Indian Railways offer free medical facilities for its employees. There are many railway hospitals and railway dispensaries in various parts of India which are exclusively meant to offer best medical treatment for railway employees and their families. Moreover, in case these railway hospitals refer a patient for medical treatment in any private hospital, railway pay off the bill for the overall treatment cost.

These were just a few key benefits of working with Indian Railways, however, railway employees get many other advantages as well. Railway employees get various training and skill development programs which enhances their skills and knowledge. Railways also have its schools and engineering college which offer great education opportunity for their son/daughter. In nutshell, working with Indian railways is a well-paid career option which comes with myriad of other benefits. So get set and prepare for railway exams. For updates on the latest railway jobs and tips to crack railway exams, keep visiting PlacementIndia.Com.

Share on
10 Reasons to Apply for Railway Jobs   (Average Rating per Visitor : out of 5, reviews)

5 thoughts on "10 Reasons to Apply for Railway Jobs