What Is The Most Important Question You Can Ask In A Job Interview?

At a time when jobs are a plenty, but the jobseekers outnumber the job openings by a substantial margin, preparing for a job interview 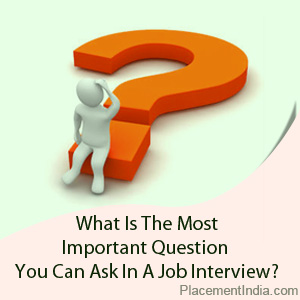 becomes a prerequisite. Over the years, job seekers have been perturbed by myriad facets of an interview for their much coveted jobs. Different people have different perspectives on the all-important question that must be put forth to the company. One can find many questions in various books related to diverse aspects of company. These questions range from the future of the company to the mission and vision.

However, not many candidates put forth a pertinent question at the time of interview to seek direct feedback about their performance in real time. Most candidates do not even contemplate asking the question, as they fear it may jeopardize their chances of a favorable reply. Being supplicant or polite is often seen as an endorsement or an affirmative reply. However, frustration creeps in once the company does not respond. The candidate is under the impression that the interview went well and a call from the company is eagerly awaited. However, the anticipation dies down soon. Most candidates find it tough to come to terms with the fact that they do not have a concrete reason for their ouster.

A question asking to highlight your own shortcomings can prove to be a panacea of sorts in such a situation. Most importantly, it helps you address your weakness, while you are present during the interview, which can be rectified later. Moreover, it shoes concern on your part and the keenness to learn, which might get you the job. 'The candidate may simply ask the interviewer if there is any shortcoming, which he may have noticed in the candidate, which may impede the chances of getting the job'.

Asking such an introspective question highlights maturity on the part of the candidate and brightens the prospects of a favorable reply from the employer. So draft the question properly and do not be perturbed no matter what the interviewer's reply is to crack the interview successfully or learn an important fact that can help you in future interviews.

1 thoughts on "What Is The Most Important Question You Can Ask In A Job Interview?