Probable Impact Of Trumps Win On The Indian IT Sector 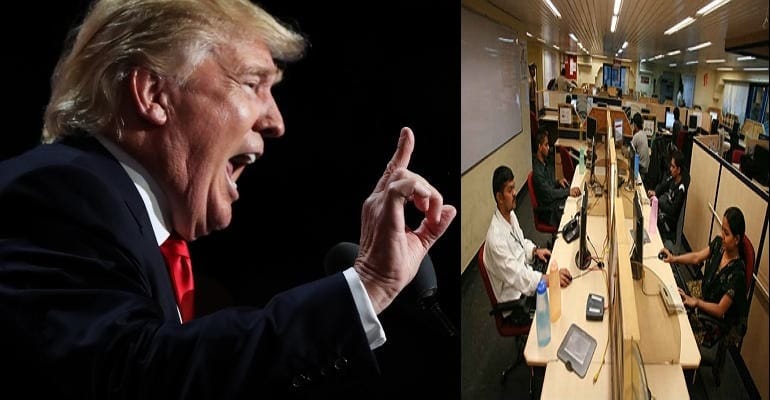 These were the exact words of the newly elected US president, Donald Trump, during the third 2016 United States presidential election debates. If he plans to go by his words then Indian IT sector is sure to experience a hard blow.

He had a clear victory over Hilary Clinton and his promise of protecting jobs for the Americans is said to be instrumental in this win. He has already fulfilled one of his promises by banning even the most qualified professionals from seven Muslim nations. If he goes on to fulfilling all his promises then the time would not be far away when he may come up with the ban on H-1B visa.

A number of Indian software engineers are settled in the US with this visa and if the above-mentioned happens then they would have to leave the country. Presently, the Indian IT industry, with a business of around $100 billion and more, get more than 60% of its revenue from the jobs that are outsourced by the companies in America. This immigration ban may be a hint of the impending danger on the Indian IT sector.

After the victory of Donald Trump in the 2016 US presidency elections, the Republican Party has finally come into force after losing twice by the Obama-led Democratic Party. Trump has always had mixed views for outsourcing; a majority of the time being against it. He could be seen criticizing the outsourcing business for stealing entry-level IT job opportunities from the Americans. His views against this were also visible in his 2011 book “Time To Get Tough”. In this book, he even advocated that a 15% tax must be levied on companies that outsource jobs to countries like India.

In his electoral debates, he hinted about banning the H-1B visa. If this takes place then a large number of Indian nationals working as IT professionals and living in the US with this visa, would be forced to leave America. He has asked several giants like Apple, Amazon and Foxconn to generate around 150,000 jobs for the American Nationals. Others who outsource to India would also have to hire local people which would cost them much more.

Cause of Concern For Indian IT

Indian IT sector, as discussed above, gets huge revenue from the American market. If the US President, Donald Trump, forces the withdrawal of H-1B visa, as hinted by him, then Indian IT sector would definitely face a severe blow. Indian outsourcing giants like Wipro, Tata Consultancy Services and Infosys are some hire professionals with H-1B visa, if Trump bans this, they would be hard hit. Not just that, hiring American locals would also cost them much higher than the Indian engineers.

With Donald Trump winning the 45th presidency elections, a number of changes would be introduced in various US policies. He has already banned immigration of refugees from 7 Muslim nations and the Indian IT sector has braced itself for any of the new policies that could be introduced by him. We sit with crossed fingers to see what new changes are made by Mr. Trump.